At the Hereford Circle meeting on March 17th, Frank and Helen Dullehan received a scroll from President Ken Lapsley to mark 40 years as a Catenian. The scroll was presented after dinner which sported an Irish theme in honour of St Patrick.

The word “Catenian” comes from the Latin “Catena” meaning “chain”. The emblem we wear consists of a continuous chain of links – the circles being the links in the chain surrounding a Cross, which symbolises that our Catholic Faith is central to all we do. 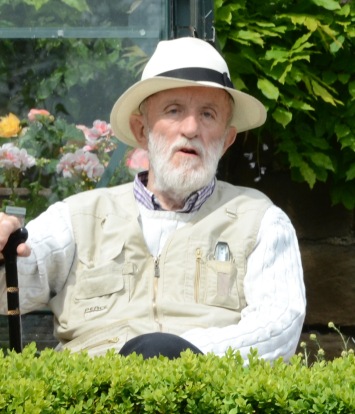 Josie and members of Brendan’s family were supported by friends, parishioners and a good number of Catenians at the Requiem Mass that was held at St Frances of Rome Catholic Church on the morning of Friday 22nd January.

Representatives from Hereford Circle, Province 12, Province 6 and Grand Council were in attendance.

The picture shows Brendan relaxing in the gardens of Hereford Cathedral that the Circle visited in May 2015.

May he rest in peace.

Jacqui and Chris are hosting a charity lunch at our home 95 Lichfield Avenue, Hereford HR1 2RL next Saturday, 30th January from 12.30pm.

We look forward to entertaining you all and boosting the Catenian President’s Charity which is Diabetes UK.

Membership of the Catenians is open to any practising Catholic layman. There is a group, or Circle in Hereford covering most of the parishes in Hereford Deanery which currently has 26 members – we refer to each other as Brother .

What do we do?

We meet monthly and our meetings always begin with prayer which includes prayer for sick members and their families and all those in our Circle who died since its inauguration in 1959. Each Brother is prayed for by name every month. We also pray for all the other Brothers of the Association who have died since the previous meeting.

We celebrate Mass together and each Circle round the world has a Mass said for Vocations so that nearly every day of every year there is a Catenian Mass for this intention.

The monthly meetings include reports on those who are sick and we endeavour to visit them and support their families; we also support the widows of our deceased brothers and invite them to attend our events.

The whole purpose of the Catenians is to build up the family of God through meeting together and supporting one another. This includes helping those less fortunate them ourselves. Most Presidents nominate a charity for their year which can be a local charity such as the local Life group or St Michael’s Hospice right up to the national charities such as CAFOD and Diabetes UK.

The Association as a whole maintains a Benevolent Fund which supports Brothers and their families in times of crisis and also a Bursary Fund which supports young Catholics aged 16-24 with some good work, often abroad including those who help the sick on pilgrimages to Lourdes with HCPT or other organisations. In our Centenary year, 2008, the Association raised of £250,000 for Water Aid.

The Association is now springing up in other countries with Circles in South Africa, India, Bangladesh, Malta and as far away as Australia. Whilst it started in Manchester in 1908, it is fast becoming a global fraternity of Catholic men.

No Circle is left in isolation and a number of Brothers visit other Circles, sometimes when they find themselves away on business and at other times on organised trips, especially to important celebrations such as Circle Anniversaries and Centenary Meetings. This visiting allows us to grow our Circle of Catholic friends, something which we view as very important in an increasingly secular society.

Hereford Circle is part of Province 12 which covers places such as Bath, Cirencester, Swindon and Bristol and over into South Wales as far as Penybont – so there is a lot of variety.

Social events can include anything from theatre/cinema/concert trips to walks in the country, dinners with our families to celebrate everything from Christmas to the installation of a new President and of course, we entertain all the parish priests in the Deanery once a year. Our widows are also invited to join us on social occasions and to the Mass for Deceased Brothers.

If what you have read so far seems interesting, why not come along to one of our meetings to find out more about us. Each meeting is held at Hedley Lodge, Belmont Abbey and is followed by a 2 course dinner. Contact our Membership Officer, Rob Warren for more details on Rob Warren robrhw@hotmail.co.uk or 01885 490350 to make arrangements.

The Hereford Circle Mass for Vocations will be said at 9.30am Thursday 3rd December at Our Lady Queen of Martyrs Church, Belmont Road, Hereford. If you can be there, wonderful, if not, please pray for the Vocations intention in your private prayers.

I was one brother in the Catenian Association who did not support the CYMFed Flame 2 Conference this year. One reason is my fear that these events serve only to entertain the youth, feeding the frenzy of what I term Catholic Consumerism, without providing any substance that will enable these young people to deepen and sustain their faith in our secular society. We are providing them with manna rather than the Bread of Life (See Matthew 4:4). This need for amusement is the reason so many do not attend Mass, because in their own words they ‘get nothing out of it’.

Young people today need authentic catechesis and evangelisation from Catholic role models, not sound bites in huge arenas. The Catenians could get involved in leading Confirmation programmes such as Transformed in Christ and help to fund candidates on the retreat in religious communities. We could also encourage young adults to become Catechists themselves and support training through places such as the School of the Annunciation at Buckfast Abbey.

Christianity in the west is experiencing a massive decline. Only 21% of the 4 million who classed themselves as Catholic in the UK 2011 census attend Mass at least once a month. Of those, only around 5% are believed to be ‘intentional disciples’, that is, actively engaged in the Church’s mission of spreading the Gospel.

I applaud Dr Stuart Blackie for his article in Catena (July 2015) and I would add to his suggested reading: ‘Forming Intentional Disciples’ by Sherry Weddell, and ‘Adoratio 2011’ edited by Alcuin Reid in which Pope Benedict is quoted from his address to the Roman Curia in December 2005, ‘Before any activity, before the world can change there must be adoration’.

Perhaps the first step is that Catenians organise periods of Adoration of the Blessed Sacrament in their own parishes and encourage people to attend, especially young people. Maybe this will help to stem the outward flow from our Church and who knows, it may even turn the tide for the declining Catenian membership.

The Catenian Association: Statement of Purpose

“A global association of friends united by shared faith and values

who support one another, their families,

the Catholic Church and young people”

In Catena, there is a letter inviting nominations for the Catholic Women of the Year 2015. I am not absolutely certain if this lady is a Catholic but her attempts to drive a motor car on water show great faith, not unlike that of St Peter.

The link below provides a short video on the vision for the proposed future structure of the Catenian Association.